The implementation of StackAssist at Fellowes Brands

Fellowes provides solutions that help people work better and be more productive. For instance air cleaners, shredders, laminators, sit-to-stand work solutions, monitor arms and ergonomic office appliances. A splendid, varied product range with which they serve customers in almost all of Europe from their headquarters and logistics center in Tilburg.

With such a varied range, there is a lot to consider in terms of logistics. Preparing a variety of more than 1000 articles – between 0 and 75 kilos and with all possible dimensions – for shipment is challenging, to say the least. A whole range of customer-specific variables such as maximum weight and height, pallet type and carrier, make the challenge even bigger.

The picking and stacking of parcels was quite time-consuming. This ‘puzzle’ repeatedly had to be put together, which was something new or temporary employees were not yet experienced in. Moreover, there was a risk of damage due to incorrect stacking and pallet and loading space were not used optimally. A waste of money and not particularly environmentally friendly. This was something that had to be improved – according to some people at Fellowes.

Fellowes’ EDC Operations Manager Maurice Boom and Logistics Solutions Engineer Glenn Laenen tell you more about the implementation of StackAssist within their organization. How did they experience the collaboration with Faes and how do they look back on this comprehensive project? 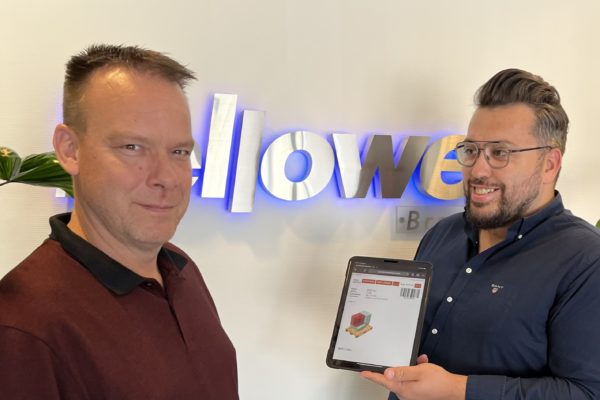 Maurice: “The initiative to implement StackAssist in Fellowes’ warehouse was taken years ago. Back then Glenn and I weren’t even working here yet. Also Erik Drissen and Harold Aling – now our contacts at Faes – weren’t on the radar yet. Partly because of these shifts, the project was put on hold at the time. Glenn and I later brushed off the dust, because we saw a good opportunity here.”

Glenn: “Despite the fact that our predecessors had already laid a foundation, fresh blood always brings new insights. Faes experienced a similar scenario. We continued to develop the plans together and both the project and the program itself have meanwhile evolved into a mature ‘2.0’ version.”

10% more productivity and up to 4% savings in transportation costs

Maurice: “What we did when Glenn and I took on this project was re-evaluate whether StackAssist would actually give us the results we were looking for. We built a business case with test phases to somewhat predict the ROI. According to our calculations, we will become 9-10 % more productive, which in reality means that we can handle the same order volume with 1-2 fewer FTEs. Rather convenient considering employees retiring and the current labor shortage.

In addition, the transport costs (and as a result also the environmental impact) could be reduced by 3-4%. We would also have a return on the implementation costs within about a year.

Due to a few hold-ups on both sides, this has turned out differently in reality, but that’s part of the risks of project-based work in which quality is a priority. With our specific wish list, we didn’t exactly make it easy for Faes. Together, however, we have paved the way, giving me confidence that the predicted ROI for new projects will be more accurate. As the first fase went live in May 2022, we will be able to measure the financial effect for the first time this summer.”

Maurice: “There were a number of things that we felt were important and that we could achieve great success with: more efficient loading, which saves transport costs and reduces our environmental impact, and more logical and secure stacking, which saves time in the picking process.” 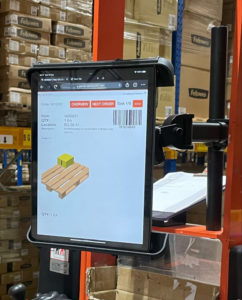 Glenn: “Some Fellowes employees have been working here for decades. They are experienced enough to know the warehouse like the back of their hand. They know exactly which order to stack in. But people retire and finding new employees is still quite a challenge. If we succeed in finding them, it takes a long time before they are as skilled as their predecessors. And there is absolutely no time to train a temporary employee intensively for four weeks. We always say ‘work smarter, not harder’. We put that into practice by implementing StackAssist.

The digital and physical process must fit together

Glenn: “What I want to emphasize is that you don’t solve all the problems immediately by implementing a system like StackAssist. The word ‘implement’ suggests that you just need to buy some software and then everything will run smoothly. Nothing could be further from the truth. We have, for example, reorganized the entire warehouse to ensure that the logic of the system matches the physical process. It is also important that your master data is correct. You must realize that the success of a software implementation largely depends on the extent to which the people in your organization support it.

For example, we involved the planning department. Releasing orders was going to work differently from what they had been used to for years. To ensure acceptance, we were able to keep the process almost identical with input from the team. “

Maurice: “People on the floor are the pillars of the system, so to speak. You can only achieve this if the software matches daily practice; after all, it’s about how the people actually use it. That is why you have to involve them. That process needs attention. It’s for good reason that Glenn has devoted 80 percent of his time to this project.”

Glenn: “A system may handle 90% of the process or slightly more, but it does not completely replace the brainpower of an employee. Those few percentages remain indispensable. By listening to the people in the workplace, we aim to get even better system output.”

Faes is a valuable partner

Maurice: “Our varied assortment was a challenge for Faes. Our cooperation with them can therefore best be described as a collaborative effort. We were in the same situation, because everyone involved was new to the project. So we really did it together; you could say it was an experimental playground. They were advising us, but we regularly came up with valuable additions to the system ourselves, which Faes can now use for projects with other clients.”

Glenn: “We have found the somewhat ‘agile’ approach and the cooperation with Harold, Erik and IT manager Raymond Kemmeren – Spaans to be very pleasant. A nice interaction, where experiences and ideas from the Fellowes practice are now being investigated or developed by Faes. Moreover, the fact that the three men were present on site during the live launch of the project says everything about their commitment.”

Glenn: “This project was no ‘walk in the park’. To put StackAssist into practice, you need an energetic initiator who can think conceptually and connect theory (IT and software) with practice and vice versa. The learning principle for Fellowes is to develop the organization on a project basis. Honestly: after a few intensive months, I dream of StackAssist!”

Would you like to know more about how you can pack and stack smarter, faster, safer and more efficiently too within your organization? Let’s meet!