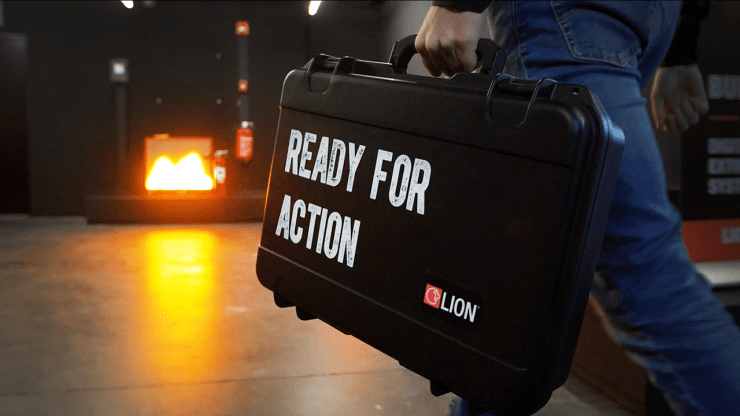 The Dutch company Lion (formerly Haagen) is a leading specialist in products for fire training and fire simulation. Originally, it is a family business with a great reputation in the firefighting world. The Dutch branch is part of Lion Apparel Inc. from Dayton USA, also a family business, with over a century of experience.

Is in-house production of packaging lucrative?

Until 2014, Faes only supplied plastic cases with customised interiors to Lion. However, this was only a fraction of the total need for sustainable packaging that Lion needed to build in or protect its products. The bulk of the packaging requirement was realised by purchasing individual cases, separate foam parts or buffer parts, individual sub-components and individual assembly parts. In the same production department where fire simulators and smoke generators were produced, the cases were ‘assembled’ by production staff. This probably originated as ‘stop work’ for the production department, but has long since become a disruptive factor in their production efficiency.

In 2015, the first talks started with Faes for outsourcing the production of the above mentioned packaging. The reason and ultimate goal of these talks for Lion was to produce 20% more with the same number of FTEs. Lion could thus focus on its core business. Business case based on packaging

In the field of packaging, Faes then drew up a business case together with Lion. On the left the current direct and indirect costs, including hidden costs. On the right the prices if Faes would manage the complete packaging policy. The balance was positive for Faes.

During the development of that business case, it was no longer just about packaging and costs, but also about added values, earning models and trust. A close cooperation can only succeed if there is sufficient trust. Both Lion and Faes were open in their communication with each other in order to achieve the set goals.

Major benefits for both parties

In this way, a cooperation model was built for the future, which offers many advantages for both parties. That is what it was all about in the end!

Benefits Lion:
• One designated contact and partner for packaging
• Stocks at Faes and no longer at Lion itself
•Just-in-time (JIT) deliveries and immediate turnaround in case of urgency
• Drawing management including revision management
• Free hours to scale up production of core products

A wonderful win-win situation and cooperation to build on for years to come!

The story behind the case

A Lion suitcase was recently the focus of Faes’ video feature ‘The story behind the case’. This customised presentation case is a gift to potential customers in which the offer is presented. You can see more about this cooperation in the video below!

Ask your question about this customer case study